City of Edmonton Strengthens Its Core

City of Edmonton Strengthens Its Core

In September 2016, the second-largest city in Alberta, Canada will celebrate the completion of a progressive stormwater management project in its city of Edmonton. Prior to its completion, a project update offers some compelling and exciting information on the project’s progress. 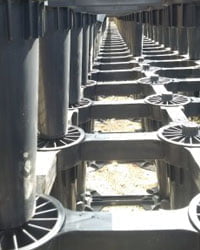 Taking place just northwest of the downtown core on 105th Avenue, Canada’s “festival city” has partnered with ISL Engineering, Carmack’s, a large civil contractor, and Citygreen West, an international leader in sustainable landscape systems. The project’s stakeholders focus on the revitalization of existing streets, sidewalks, and curbs that are, “well past their lifetime,” reported Matthew Biggs of Citygreen West.

Edmonton’s city limits hold seven sectors, with the mature downtown sector at its core. Surrounding it are six suburban neighbourhoods. The majority of the buildings and infrastructure were built prior to the 1970s, and the new generation is taking steps to revitalize their city infrastructure and take an active role in the management of stormwater.

“Primary goals of the city are to remodel the streetscape as part of a plan to upgrade the area...The present street is an aging warehouse and industrial zone, which is being upgraded to modern, sustainable multi-family dwellings,” said Biggs.

Upgrades are meant to allow for a flourishing urban forest, in conjunction with a responsibly planned stormwater management system that proves successful, “by directing street stormwater into large soil-filled tree pits and draining it through collection pipes at the base of the tree growing areas,” said Biggs. The ultimate solution for Edmonton’s design challenges is Citygreen’s innovative Stratavault soil cell system.

The open matrix design boasts unique advantages that presented solutions to challenges and considerations like project cost, transport, installation, as well as the need for green infrastructure and stormwater quality objectives. The cell’s components are able to nest inside one another and are constructed of lightweight polymers, allowing for significantly lower costs in freight. Once the product is at the installation site, its simple construction doesn’t require unique tools or specialized labor, thus also allowing for a smaller task force.

The Stratavault’s open design allows for the unhindered installation of all necessary subterranean construction, such as water pipes. Even so, with its “quick and simple to assemble” matrix design, the cell system continues to provide the surrounding sidewalks, “with sufficient structural integrity to withstand traffic loads,” Biggs noted. 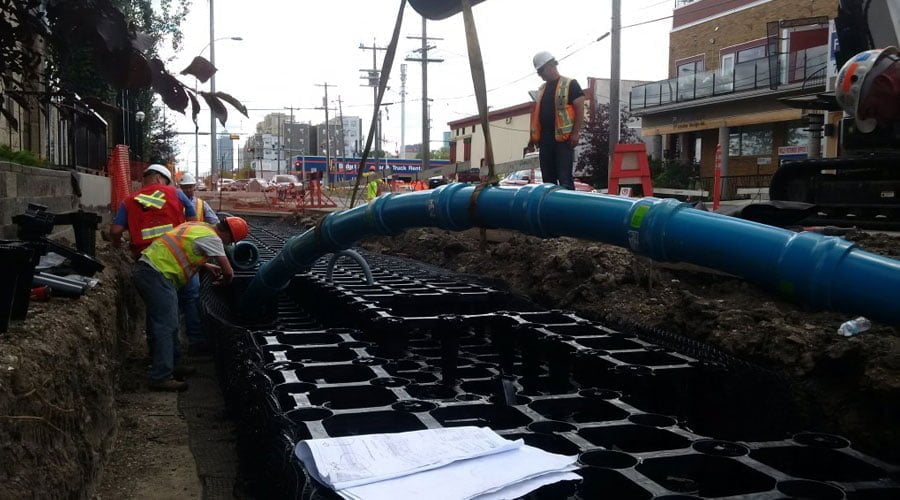 The open voids allow for tree roots to establish and grow as naturally as possible in the oxygen-rich soil, a thing of the future compared to conventional single slab planters. These conventional builds have soil that is too compacted for natural root growth, or for rainfall to be properly absorbed and redirected, resulting in unhealthy or dying trees, eroding landscaping, and ultimately, unnecessary expense in the city’s green infrastructure plans and initiatives.

With 105th Street’s central location inside the city, the active efforts to reduce the damaging effects of unmanaged stormwater levels require large pipe sweeps to be safely integrated into the Stratavault installations. In short, Citygreen’s cell systems are offering the city of Edmonton solutions to all the project’s concerns and goals with a single product. 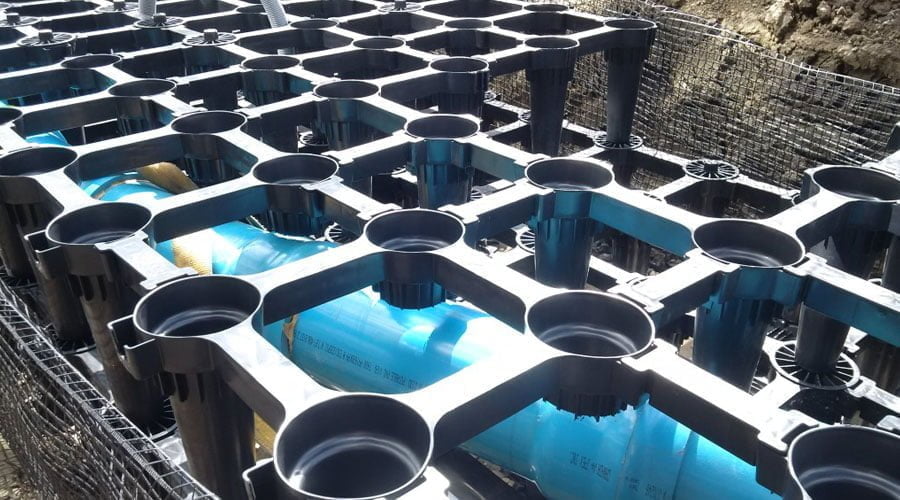 An innovative process “approved by the Stratavault manufacturer” was proposed featuring 200mm, eight-inch water pipes, which were able to be safely integrated and routed through the cells, “with minimal interruption to the structure.” Because the Stratavaults are interlocking, void of bolts or other connectors, individual single-leg sections of the matrix system can be removed for the pipe sweeps, leaving the top layer in place. The sidewalk structure is then reinforced with a bridging section layered on top of these particular areas. This engineering modification would not have been as likely with another form of green technology.

Since the project’s onset in May 2015, the first tree pits have been installed and were backfilled with soil quickly and efficiently by Carmack’s subcontractor, 7M Landscaping.

In a final statement on the partnership with Edmonton's city staff, Biggs reported that the installations are already showing positive results. "This retains the key feature of the Stratavault cell structure - its strength as a connected matrix...." just like the interconnecting streets and communities within the city of Edmonton itself.