Trees usually come second to footpaths, roads, kerbs and gutters – but Marrickville Council is determined to turn this thinking around.

So when a footpath was being upgraded in Cavendish Street Stanmore, Council’s ‘whole of street’ approach presented an opportunity to remove and replace three very large Ficus hillii with an in-road tree planting of three super-advanced Waterhousea floribunda (Weeping Lilly Pilly).

This new approach by Council means that damage from tree roots to nearby properties and structures will be prevented. It’s all part of a new initiative called Connecting Marrickville. 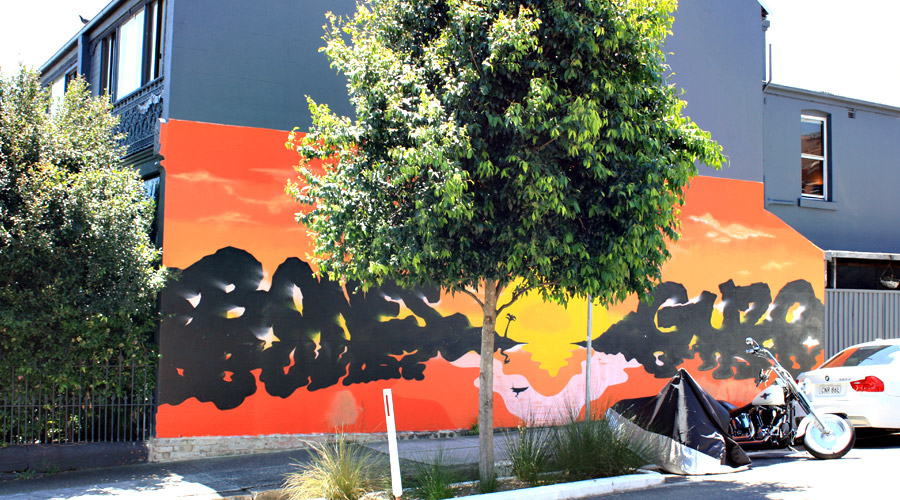 Connecting Marrickville puts people and the places they live in at the centre of all infrastructure planning. It aims to make streetscapes better now and into the future. How? By integrating all elements that make up a liveable sustainable community.

Gwilym Griffiths, Council’s Coordinator Tree Management, was part of the multi-disciplinary team who worked on the design, construction and communication. He said the objectives were to demonstrate a new way of managing the conflicts between trees and infrastructure; plan for large trees in tight urban spaces so that there is significantly less need for pruning and patching of damaged infrastructure, and to integrate tree works and footpath replacements in one project. 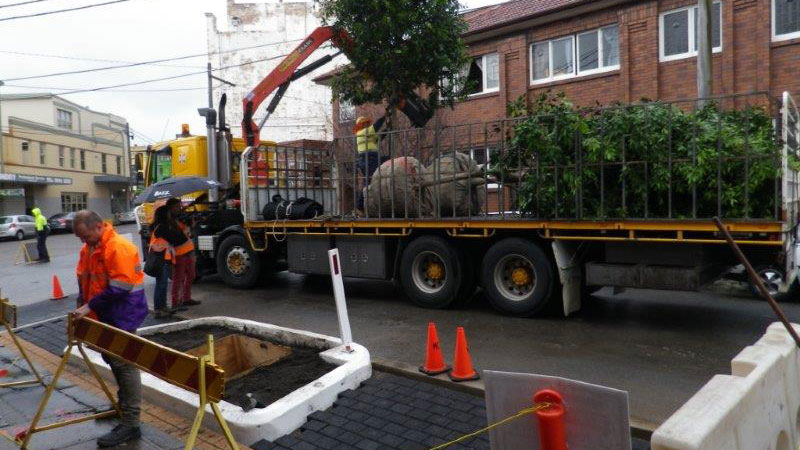 The project site construction started early May 2014 and finished in June 2014.

“There is more and more pressure on street trees,” he said.

“In many towns and cities, development means that people and trees are brought into increasingly closer contact. Space for large trees to establish to full maturity is limited. It’s all exacerbated by poor or disturbed soil conditions in built up areas, and conflicts with underground and aboveground services,” Griffiths said.

“And there’s this idea that large trees cause damage or can be dangerous. They might drop branches, or block sunlight, or damage infrastructure,” he added. 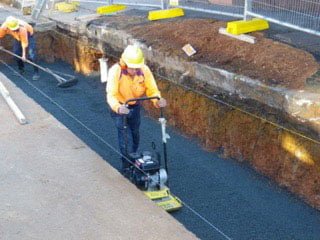 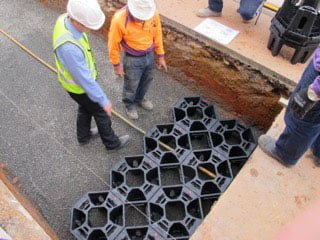 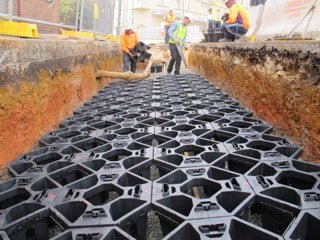 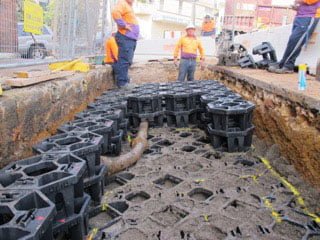 Connecting Marrickville will manage these issues by planning for the needs of the trees (providing them with the soil and space for long term growth) instead of just planting trees in the spaces ‘left over’ after development.

In a council video about the project, residents commented on the bumpy footpaths, saying while they wanted more greenery, they didn’t want tree roots ripping up the path. 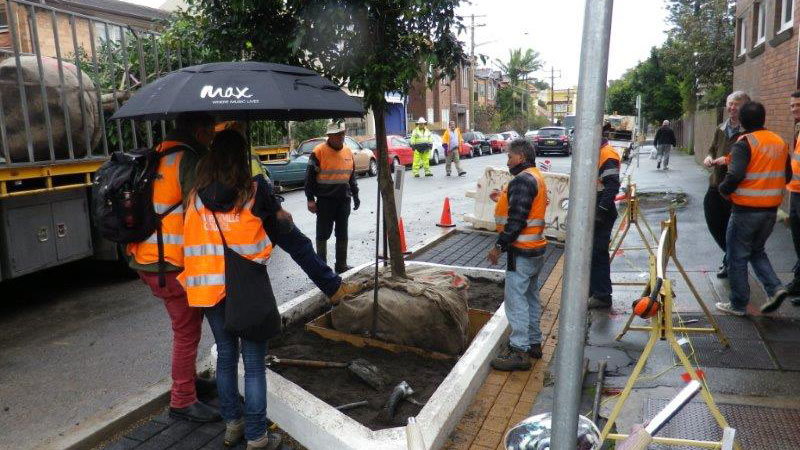 “We chose this system because it provided the best soil volume per dollar when compared with other structural soil systems such as aggregate soil and pier and beam vaulted systems,” Griffiths said. 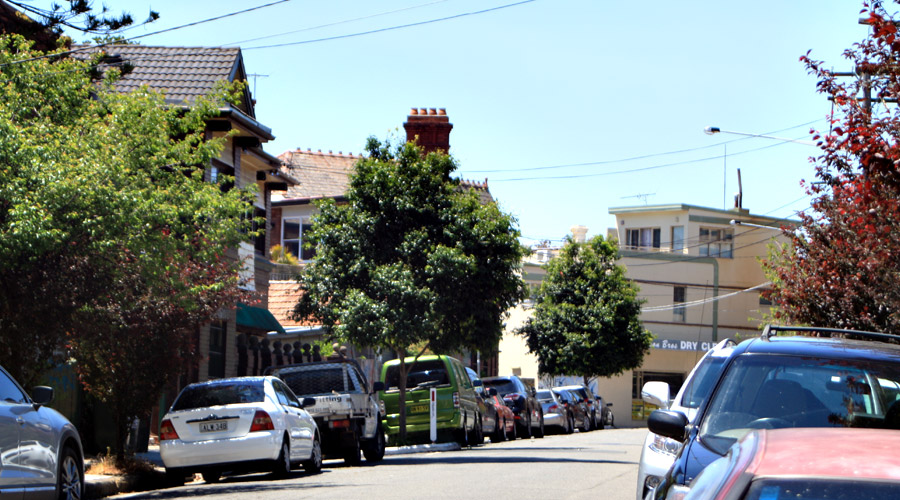 The system, Griffiths said, is very easy to install and doesn’t require specialist skills. They had very minor difficulties fitting cells around numerous services, and during the initial design phase, in getting the specification correct. 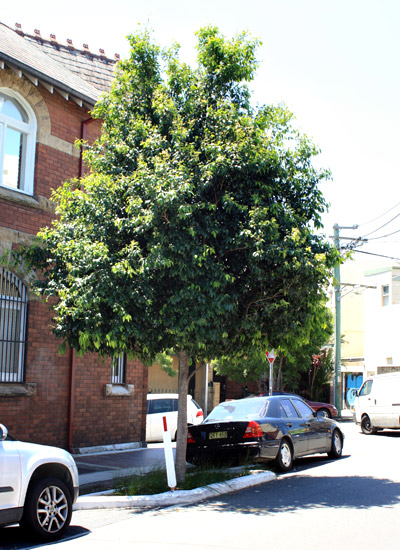 “We also received a lot of rain during construction, which required pumping out and modification of the gutter to reduce the amount of water flowing into the pits,” he said.

Ryan Hawken, Council’s urban water engineer, said although the upfront cost was higher than previous projects, there are long term benefits such as much less damage to footpaths and houses.

Council will monitor costs over time in order to continuously improve performance and management of streets and trees. Since the project was completed, Griffiths said the biggest issue has been to maintain adequate water to the trees.

“Initial water budget estimates were quite low and since completion have been increased to accommodate actual site requirements,” he said.

The project included planting of biodiverse species of grass and ground cover and stormwater management by adding permeable paving over the tree pit to capture surface water. “And the Stratacell fits well with this,” Griffiths said.

“Today, the trees look good and are stable. We would definitely use a similar system again,” he said.

The project is being used as a case study for Council’s Connecting Marrickville initiative. This project delivers on a range of Council strategies and provides Council with a great example of what can be achieved with the right thinking.