The critical role of ‘everyday nature’ for the future of cities

As Australia’s population grows, additional urban land is required, or existing land is used more intensely. In Australia, population growth tends to be most concentrated in outer suburbs, in inner cities, in urban infill areas and along the coast. Our big cities continue to expand into natural areas on the city fringes, despite the well-recognised problems associated with higher infrastructure costs, lack of amenity, car dependency, poor job access, and diminished agriculture and open space (Newton 2012). In Melbourne, 50 per cent of the approximately 40,000 new dwellings built each year are in new greenfield sites (Buxton 2014). Targets for infill housing established in recent metropolitan strategic plans are not being achieved (Newton 2012).

The threatened Grassy Eucalypt Woodland of the Victorian Volcanic Plain is encroached on by Melbourne’s peri-urban zone, with woodland remnants cleared to allow increasing urban development. Additional growth centres are planned. In response, the Victorian Government is establishing conservation areas in and outside the growth corridors to protect threatened species and ecological communities of national and state significance, and to manage the impacts of urban development in urban growth corridors. Similarly, encroachment of urban development on the Cumberland Plain Woodland in the Sydney Basin has reduced the community to small fragments scattered across the western suburbs of Sydney, and it is now listed as critically endangered.

Urban development is a major driver of environmental change. Urban areas contain threats to, and opportunities for, biodiversity. The conversion or degradation of natural ecosystems in urban areas has the most obvious and immediate impacts on biodiversity. In addition, human settlements and development are often the entry point for introduced species, which are a major pressure on biodiversity. For example, non-native invasive garden plants, introduced to Australia by and for the urban population, make up an estimated 72 per cent of environmental weeds that affect biodiversity (Groves et al. 2005).

In contrast, the urban environment can prove an attractive habitat for a wide range of taxa because of abundant food and shelter. Urban areas may also provide more stable resources for some native species as a result of planting selection and supplemental watering. Some urban habitats, such as railway lines, abandoned industrial lands and urban wetlands, can be rich in native species and can play an important role in maintaining the biodiversity of a city.

Although the presence of wildlife in urban areas can enhance human quality of life (see Box BIO3), some urban animal populations can prove problematic because of their impacts on amenity or their role as vectors of disease. For example, roosting by flying foxes in urban and peri-urban areas can result in contact and conflict with humans. Human concerns include noise, odour and faeces from flying fox camps, particularly when they occur near residences. Transmission of disease, particularly Hendra virus and Australian bat lyssavirus, is also a key concern and has received much attention during the past few years. Although smaller camps are often tolerated, larger camps become a focus of community disquiet. The spectacled flying fox (P. conspicillatus) and grey-headed flying fox (Pteropus poliocephalus) are both listed as vulnerable under the EPBC Act. They have both shown marked changes in the distribution of their abundance during the past 15 years, in the form of increases in the number of urban camps and in the proportion of their populations found in urban contexts (Tait et al. 2014, Westcott et al. 2015). It is unclear whether these changes represent responses to the development of appropriate conditions in urban areas, the deterioration of conditions elsewhere or the cessation of exclusion from urban areas. Regardless, the shift represents a major management dilemma, given the conflict it produces and the conservation status of the 2 species.

Cities are often located in areas with high biodiversity, and the process of urbanisation itself is likely to have led to many species that formerly occurred in these places now being threatened. In 2015, Ives et al. (2016) analysed the extent to which the distribution of 1643 species of national environmental significance under the EPBC Act overlapped with 99 Australian cities of more than 10,000 residents (Figure BIO5). They found that 25 per cent of listed plants and 46 per cent of listed animals had distributions that intersected with cities. The distributions of 8 threatened species (all plants) entirely overlapped with cities, whereas 51 (10 per cent) of the 503 threatened species found in cities had more than 30 per cent of their distribution in urban areas. The research showed that cities contain substantially more threatened species per unit area than non-urban areas. 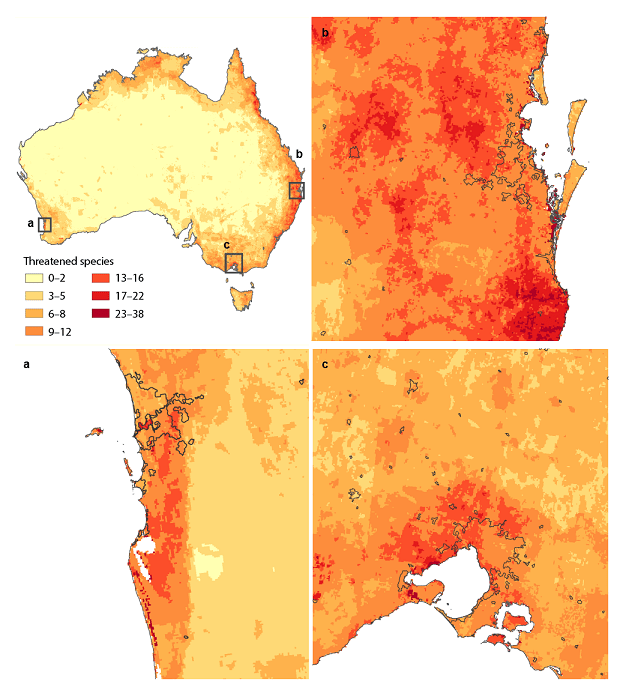 Note: Urban areas are outlined in black. Cities shown in greater detail in boxes are (a) Perth, (b) Brisbane and (c) Melbourne. Source: Dr Pia Lentini, University of Melbourne, used under CC BY NC using data supplied by the Australian Government Department of the Environment and Energy

Urban growth has been shown to cause overall reductions in the distributions of birds in Brisbane; however, spatially constrained, compact development substantially slows these reductions, resulting in fewer local extinctions. Averted local extinctions under compact development are most pronounced for urban-sensitive species that are dependent on large intact remnants of natural habitat or open space within a city (Sushinsky et al. 2013). Other research has shown that large native trees in urban areas provide crucial habitat for wildlife. In Canberra, the presence of large native trees in urban parks increases bird diversity and abundance (Stagoll et al. 2012).

Citizen-science initiatives focused on urban areas, such as BirdLife Australia’s Birds in Backyards and School of Ants Australia, are helping to improve knowledge about urban biodiversity and management.

Urban greening can substantially improve the resilience of cities to climate change, potentially cooling cities by up to 8 °C in summer, alleviating the impacts of flooding and providing shelter from extreme weather events. Vegetation in cities can also play a significant role in mitigating climate change impacts by sequestering greenhouse gases, and reducing energy consumption for cooling and heating.

Creating opportunities in cities for everyday interactions with nature provides an unparalleled opportunity to reconnect people with biodiversity, and expose urban residents to the myriad health and wellbeing benefits provided by nature. Furthermore, urban renaturing has the potential to connect urban residents with Indigenous history and culture, and create an avenue for preserving traditional knowledge and engaging urban Indigenous people in city planning processes.

The reasons for embracing nature in cities are compelling, but the pathways to achieve this vision are not always straightforward. An important first step is to reframe the way nature is considered in the planning process. Rather than considering nature as a constraint—a ‘problem’ to be dealt with—nature can be seen as an opportunity and a valued resource to be preserved and maximised at all stages of planning and design. It also requires a different conceptualisation of nature, where novelty is the norm and apparently scrappy bits of urban nature can have as much value as pristine nature reserves. The future of our cities may well depend on a new conceptualisation of urban landscapes, where nature can thrive and people can enjoy—every day—the remarkable range of benefits that nature can deliver (Figure BIO6). 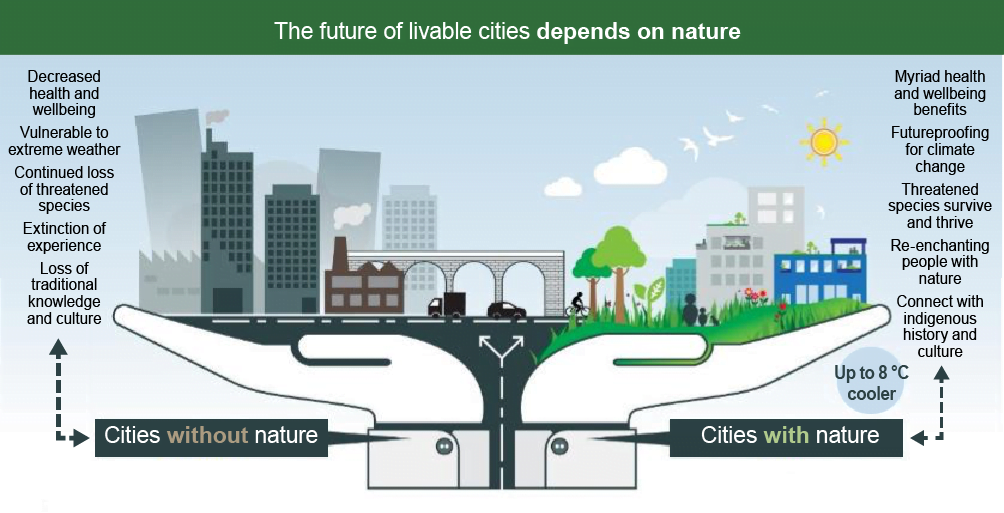