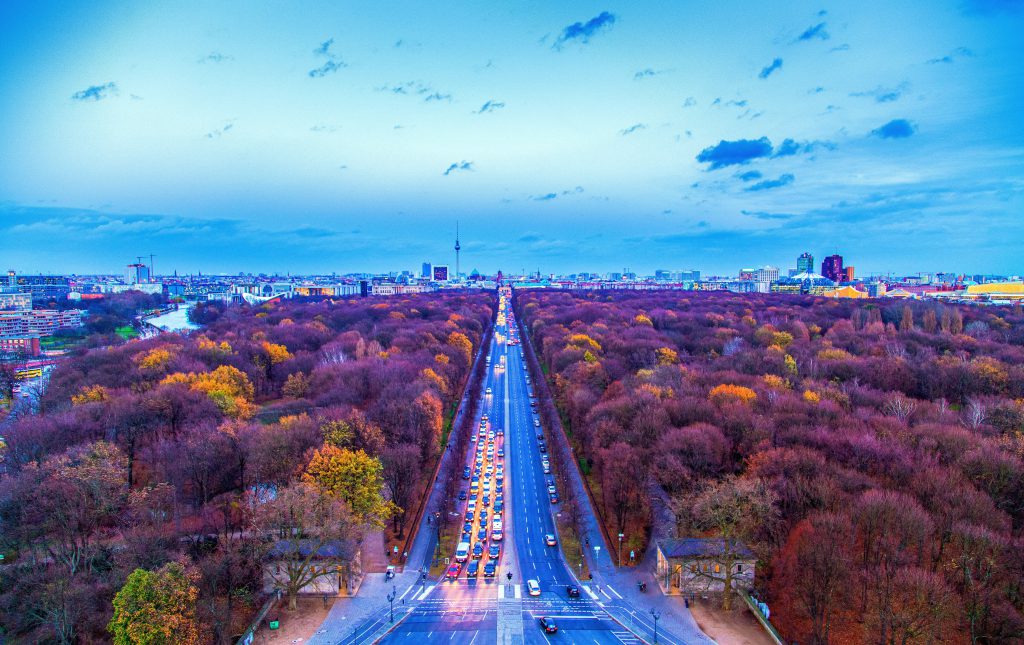 “Covered either by bristling forests or by foul swamps” is how Tacitus described the wildlands of Germania in 98 AD. While those ancient trees, from which Teutonic tribes emerged to maraud the Romans, have long since vanished, modern Germany’s capital is still home to a vast and vital urban forest.

Berlin is one of the greenest cities in Europe: About a third is taken up by parks and green spaces, and the streets are lined by more than 430,000 street trees. Lindens (also known as lime trees or basswoods) are the most common, their heart-shaped leaves visible all over the city. They even lend their name to the grand central boulevard, Unter den Linden, once Berlin’s answer to the Champs Elysée or 5th Avenue.

Street lindens belong to the cityscape as much as the palms of LA or the sakura of Tokyo, though few of Berlin’s thousands of streets trees are older than 70. During the 1940s, 60%of street trees were wiped out by the onslaught of the Second World War. Trees that survived the Allied bombing were cut down for firewood in the freezing winters that followed. 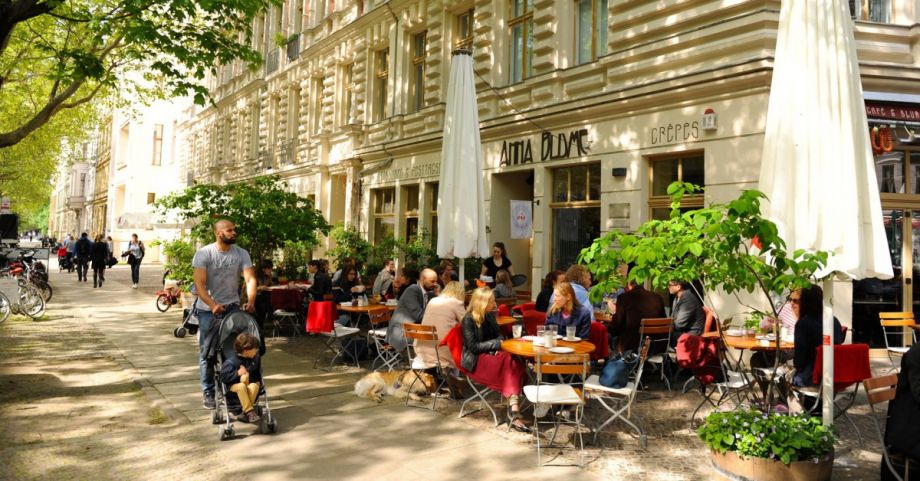 Post-war, reforesting the ruins became an act of restoration and resilience. The first linden was replanted in the Tiergarten in 1949 by Mayor Ernst Reuter, during the Soviet blockade of West Berlin. The replanting effort was judged to be so important for morale that, along with essential food and fuel supplies, up to 200,000 young saplings were flown into the divided city by the U.S. Air Force.

Now, Berlin’s recovered tree population is once again at risk — this time from a chronic drought — and a new app has been launched to save them.

Gieß den Kiez (Water the Neighborhood) is an interactive platform that invites users to keep an eye on local trees and in times of need, bring them a bucket of water or splash from a hose. The map displays over 600,000 individual trees (both street trees and park trees), together with up-to-date information on species, age, water needs, and recent rainfall.

The prototype was developed at CityLAB Berlin, a research and development hub funded by the Berlin Senate and Technologiestiftung Berlin. Julia Zimmerman is part of the team. “We want to show people what kinds of digital solutions there are for real-life problems,” she explains. For most users, the map gives a completely new perspective of life on their street. “That was the first thing I did with the website,” Julia says. “Check which trees are growing outside my front door.”

But it’s not just a novelty. For the first time in generations, tree numbers in Berlin are falling. The principal cause is extreme weather. First came Cyclone Xavier in 2017, which uprooted and damaged thousands of trees across the city. Then came chronic droughts: Both 2018 and 2019 recorded high temperatures and minimal rainfall in spring and summer, and 2020 is shaping up to follow the same pattern.

“The situation is very urgent,” explains Christian Hönig from the environmental group BUND-Berlin. “In the last very dry years since 2018, the annual number of street trees felled has increased by about 20 %.” Street trees bring a host of benefits to the city. They regulate temperature, filter airborne pollutants, and provide a home to local wildlife. “They also shape the space we live in,” says Christian, “just like architecture.”

Urban tree care does not come cheap, however, and Berlin’s finances are famously dire. According to the Berlin Senate, it costs €2,000 (about $2,250 USD) to plant and maintain a tree in the first two years, during which time the young plantings can need as much as 50 litres (13 gallons) of water per day if temperatures are high.

Faced with dramatic tree losses, the city has already made €22 million (about $26 million USD) of extra funding available to district councils for 2020, and spending per street tree has been increased from €48 to €82 ($56 to $96). An annual campaign is also underway to raise donations from the public.

But as temperatures rise and skies above Berlin remain blue, street trees young and old need all the help they can get. This is where Gieß den Kiez, with its model of neighbourhoods watered by the neighbours, could bring about a radical change in how city trees are cared for. 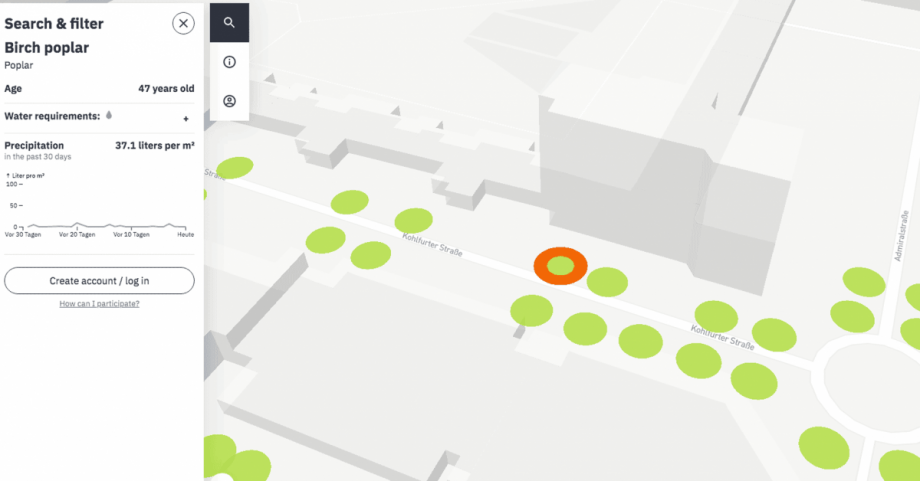 Every tree in Berlin is mapped so users can see how much water a tree has received and how much it still needs. (Screenshot from Geiß den Kiez)

The prototype went live in May and in the first six weeks, registered 1,000 unique users and over 7,000 individual tree waterings. “The first weeks were totally crazy,” Julia laughs. “Through coronavirus, I think a lot of people found more time for themselves and also for their environment, for nature.”

User numbers are still rising daily and community groups are using the platform to coordinate their watering activities with local authorities. She is also pleased to see that elderly users are getting in touch with questions about using the platform. “The issue is encouraging older people to get to grips with new technology.”

“I find it really beautiful to see the issue is so important to the people of Berlin,” she adds. “I’m optimistic when I see how big the community is, how much the different district councils are reaching out to us. They all seem to have woken up.”

Open platforms like the Gieß den Kiez, which make public data accessible, can be a powerful way to get citizens engaged in city issues.

“It can help people to have a better appreciation of how it is the government does what it does, so there’s less of a wall between them and government, as this mysterious thing,” says Steve Benett. He is the founder of Open Trees, the world’s biggest database of open tree data. Using datasets from public sources, he has mapped street and park trees from cities around the world onto a single global map.

“It’s not that obvious to the average citizen just how many frickin trees there are,” he says. Visualisations like his can help people understand the challenge of caring for hundreds of thousands of trees in a major urban area. “You get this squeeze, where the government has to turn back to the citizens and say, well maybe we can’t water all the trees, maybe you’re going to have to come and help out.”

Cities in the U.S. have been experimenting with similar platforms, to win more volunteers in the fight to protect and care for urban forests.

The New York City Tree Map is run by the NYC Parks Department and shows data on 692,892 trees across the five boroughs, including a log of volunteer care activity, from watering to mulching, and a running tally of the annual value of urban trees to the city (currently $104,991,168.49, a reflection of trees’ roles as shade, carbon dioxide and pollution removers, and stormwater retainers).

“The map is intended to be the one-stop shop for New Yorkers to learn about and care for their street trees,” says Dan Kastanis from NYC Parks. Built from data gathered by an army of volunteers in the 2015 tree census, the map is designed to give a live connection to the status of each individual tree, as well as resources on tree care and community workshops. Though New York’s map is the most sophisticated, other cities like Washington, D.C., Seattle, San Francisco and Los Angeles have all published their tree data on similar platforms.

These projects all share the conviction that finding engaging ways to visualise and interact with data can inspire locals to get involved and become active volunteers. Tree stewardship is a model in which citizens and local government share the work of tree care, not just in seasonal crises like a drought but on a basis of long-term cooperation.

“We believe stewardship of our urban forests requires a team-based approach,” says Rachel Holmes from The Nature Conservancy. In collaboration with the U.S. Forest Service and the Center for Invasive Species and Ecosystem Health at the University of Georgia, she works on Healthy Trees, Healthy Cities, another tree care and mapping platform. “By first educating people about trees and what they need from us, and then providing an accessible mechanism through which people can meet these needs, we are hoping to inspire a lifelong connection to nature and commitment to its care.”

Yet the burden of ownership which online stewardship seeks to foster is not always welcome. Some communities raise concerns about the maintenance costs of new trees. In San Francisco, for instance, homeowners, and not the city, bore legal responsibility for any damage caused by trees growing in the sidewalk adjoining their property — including eye-watering bills for root damage to sewers — until the law was changed in 2016.

Street trees also bear out the legacy of social and economic inequality. A 2016 study of the City of Los Angeles found the benefits offered by street trees was skewed, with nearly a fifth of the urban canopy growing in an area where only 1% of the population lives. At the same time, planting trees can seem tokenistic in the face of long-standing neglect. In Detroit, there was pushback against tree planting initiatives by communities who felt abandoned by city authorities in so many other ways that they felt no stake in the planting of trees. If city forests are to be recognised and protected as green infrastructure, with benefits available for all, then addressing inequality must also be part of that conversation.

For Julia Zimmerman, community apps like Gieß den Kiez can help us recognise trees as a point of connection in the shared life of a city, part of its past as well as its future.

“Berlin is and will hopefully stay a green city,” she says. Along with one of her favourite streets, Puschkinallee, towering plane trees have stood since the late 1870s, improbable survivors of history. Their loss would be shared by all Berliners. “Especially in a city like Berlin, where the past is extremely moving — and the trees have lived through all of it with us.”

Source: Written by Edward Belleville based in Berlin