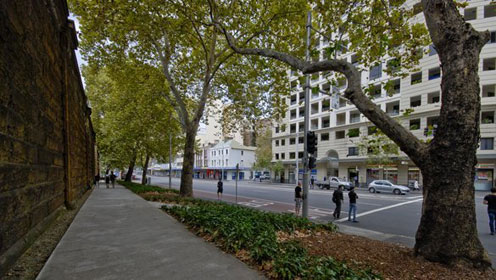 Urban streets with lots of trees must be cooler than those without, right? Recent research from Western Sydney University proves just that, revealing how the presence or absence of trees impacts temperatures at the ground level in urban environments. The study led by Dr Sebastian Pfautsch, a senior research fellow at the university, analysed temperatures at various locations in Parramatta, Cumberland and Campbelltown last summer.

Two streets in Parramatta – located just a kilometre apart – showed a clear difference in temperature during a heatwave. Daking Street was the hottest street in the City of Parramatta’s municipality with residents experiencing a sweltering 13 days of 40°C or higher temperatures. Galloway Street, on the other hand, had a relatively milder microclimate with the area having just five days of temperatures above 40 degrees.

What was the difference? The study found it was the streets’ tree canopies. With just 10% tree coverage and more exposed bitumen, Daking Street was unsurprisingly hotter. Galloway Street had 30% tree canopy cover, reducing the heat from the sun hitting the ground.
Pfautsch’s research once again underlines the importance of tree canopies in urban ecosystems and how they can impact the microclimate of each area; greater tree coverage, for instance, can create 10-degree temperature differences, increasing comfort levels even during extreme summer heatwaves. Without a tree canopy, the heat from the sun directly hits the ground and gets trapped, before being released into the atmosphere and increasing the temperature.

Pfautsch has called for legislation that would require every house to plant two trees to mitigate heat. The research also blames construction for the increasing urban temperatures. City of Parramatta Council Lord Mayor Bob Dwyer reiterated their commitment to NSW Government’s plans to plant five million trees across Sydney by 2030, a move that’s expected to take the city’s tree canopy from the current 16.8% to 40%. No doubt the residents on sweltering Daking Street, and many other hot urban streets, hope it happens.