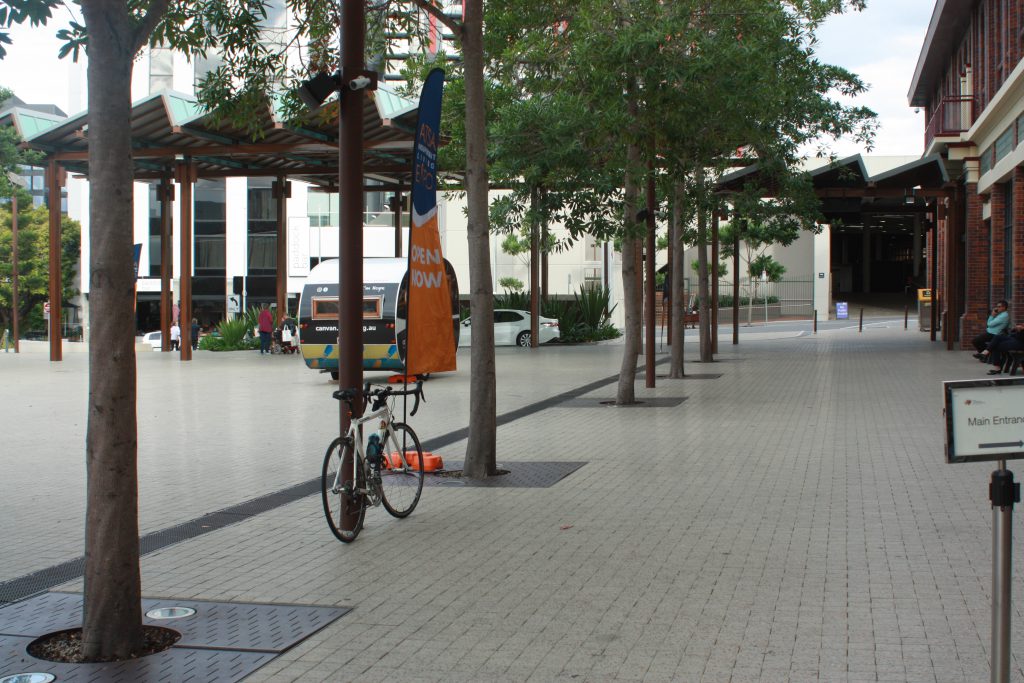 The Brisbane Showgrounds has been an epicentre of agriculture and entertainment since 1875. Home to the Royal Queensland Show – colloquially known as “the Ekka” – the site attract thousands of visitors each year. So, when the Royal National Industrial Association (RNA) partnered with Lendlease to embark on a redevelopment project in 2010, it presented one of the most significant urban renewal opportunities in Brisbane’s history.

At $2.9 billion, the project was the largest brownfield redevelopment of its kind in Australia – and it all started with the “Ekka” Plaza.  The Plaza acts as a gateway to the Royal International Convention Centre (RICC) and provides a modern space for events and exhibitions within the Ekka precinct. It also establishes pedestrian connections between King Street, the Royal Brisbane and Women’s Hospital, and public transport lines.

Lat27 were the lead consultants for the design and documentation of The Plaza redevelopment. Citygreen worked closely with the Lat27 team to deliver a breathtaking space that addresses place making, sustainability and connectivity, while honouring the legacy of the site. 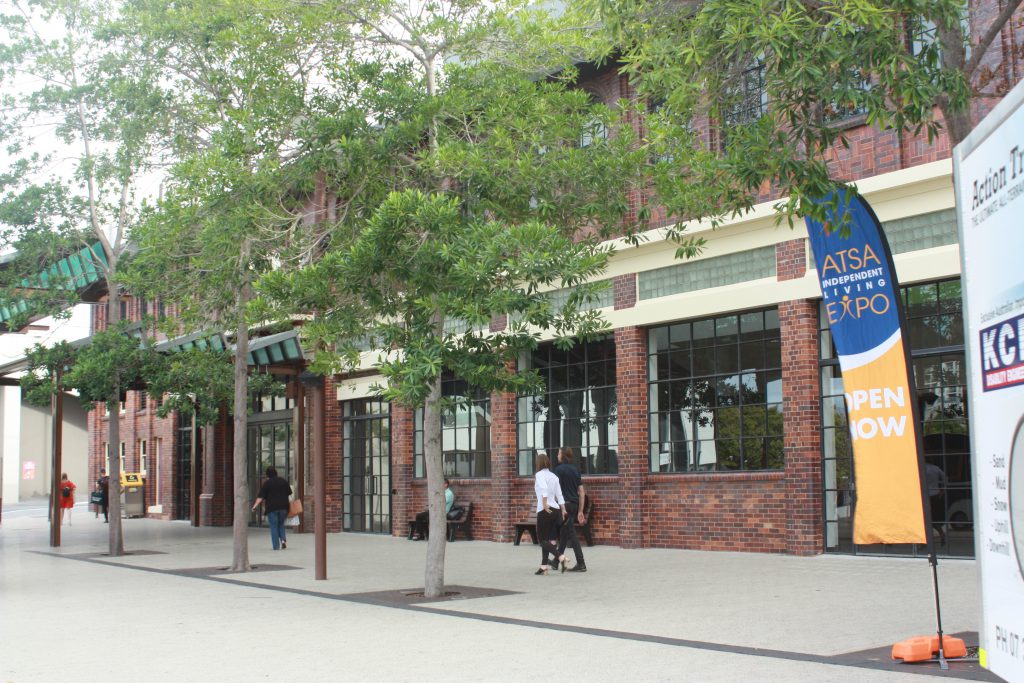 As Matthew Nolan, Associate Director at Lat27, explained: “This new space was created through the removal of several small buildings, revealing the heritage RICC façade and providing a robust new open public plaza supporting the existing heritage spaces of Gregory’s Rest and Stockman’s Rest. The hierarchy of the new space references the historic structure and functionality of the showgrounds, with large flexible spaces for events and smaller densely shaded spaces for respite within a highly connected network.”

While the project has been a resounding success since The Plaza reopened in 2013, the site posed significant challenges for the design and development team – particularly when it came to trees.

“The inclusion of significant trees was critical to the success of the new plaza for shade and balancing the scale of the space. However, the project brief to provide multi-purpose, high-loading hardstand for event modes, circulation routes, and changing levels across the site meant we were unable to have broad expanses of open deep planting. High rock shelves and multiple service infrastructures added further restrictions on below surface designs,” said Matthew Nolan.

“During the design phase, development assessments between traditional structural soil trenches and tree pits with Stratacell were carried out in regard to achieving the required soil volumes versus the costs of excavating the surrounding rock, providing the 40t pavement capacities, and construction programming. At this point, we consulted Citygreen to review options for soil pits and tree grate integration. Stratacell was the clear choice for its horticultural benefits and economic efficiencies,” said Matthew.

Compared to structural soil, Stratacell provides larger spaces for tree-root growth and delivers over 94% of total soil volume. This means trees are given the best possible chance to thrive, even in challenging urban conditions. Stratacell also offers a range of other installation, environmental and cost benefits, including:

Using Stratacell technology, Lat27’s striking design for The Plaza was brought to life, with the added bonus of stormwater management and irrigation.

As Matthew Nolan explained, “The final design consisted of Stratacell Series 30 cells in 3x3m (wide) x 2m (deep) tree pits excavated into varying densities of rock. Into the tree pits, we planted nine advanced (6 – 8 metre) Elaeocarpus Grandis, which make a striking visual statement. Irrigation was imperative to the trees’ success, so the bases of the tree pits were interconnected with subsurface drainage lines back to the stormwater system.” 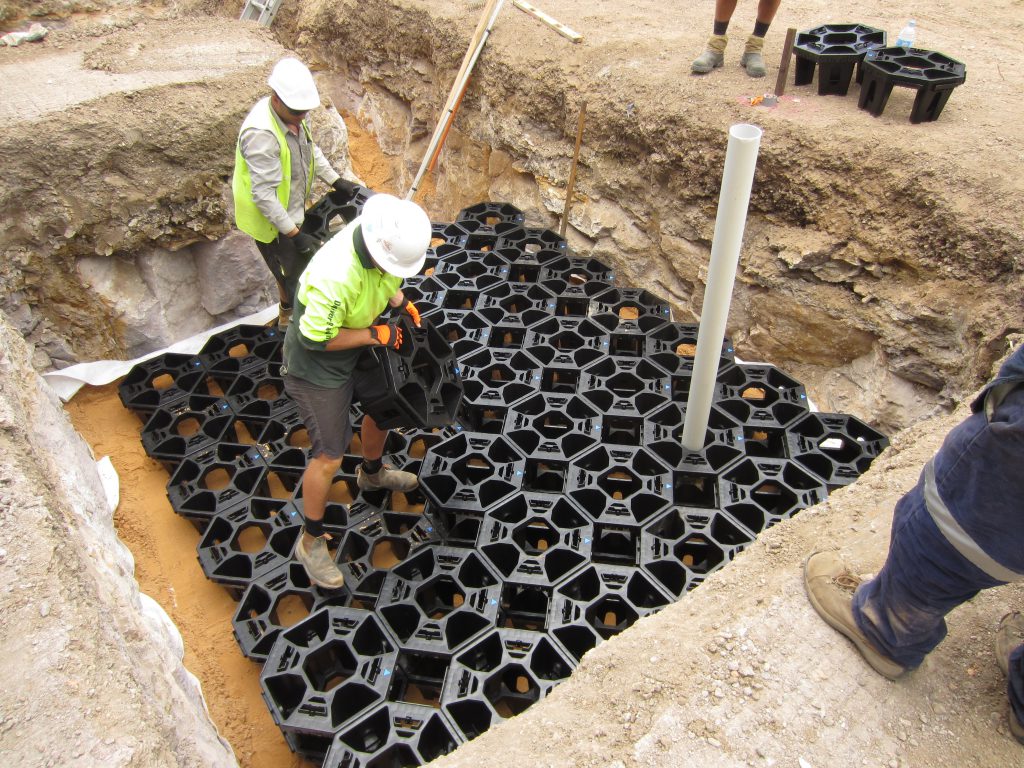 Despite needing to hammer through rock to create the tree pits, the perseverance of the design and development team – together with the contractors – paid off. Two years after completion, Matthew Nolan reported that: “The Stratacells have achieved notable good health and vigour for the trees, while surrounding pavements have remained completely stable through multiple events including two Ekka Shows.”

He added that, “Citygreen were fantastic to work with, and continually provided horticultural and engineering advice throughout the design development process, which was much appreciated.”

“During construction, Citygreen provided on-site supervision for installation and structural certification on completion. The support provided by Citygreen throughout the whole project greatly assisted us to achieve the overall goal of significant trees within the physical and functional constraints of the project. The end result speaks for itself.”

Today, six years on from completion, The Plaza is a vibrant events, lifestyle and dining precinct – complete with dense tree canopies that continue to thrive. It is a popular destination within the Ekka precinct, which has been recognised and awarded by the urban renewal industry.