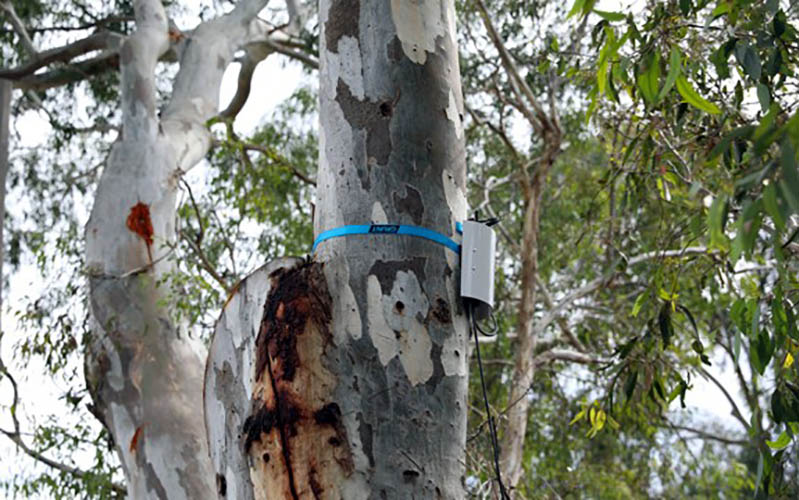 The sensors are designed to create stronger, healthier urban forests. They also enable park managers and members of the community to track the progress of trees via online platforms that provide real-time data on water use and water stress.

During the pilot, data will be collected via sensors attached to the trees. It will be used to determine the most suitable species for current and future climates. It will also allow forest managers to determine how much water to apply to their trees, and when.

Dr. Rayburg says, “The project is transformational. Instead of trees dying at 80 years of age because they are spending their whole lives in water stress, they’ll live to be two or three or maybe even four hundred years old. That matters because when we lose a tree in an urban landscape we lose habitat, we lose cooling, we lose a part of ourselves, and people have a really visceral connection to trees.”

He also notes that this project is the first of its kind in the world, saying “These sensors have previously been used in agriculture and plant biology, but never before in an urban forest management setting.”

The sensors are the first stage in this pioneering project, which plans to go one step further with an app that allows the trees to ‘talk’.

“The City of Melbourne has a platform called Urban Forest Visual that allows people to send an email to a tree and then somebody from the City of Melbourne responds to the email,” Dr Rayburg says. “This has been really popular, which demonstrates the desire people have to interact with nature, even in cities.”

“We want to take this to the next level; instead of a person responding, we want the tree to respond.”

The proposed app will allow members of the community to contact a tree and ask how it’s going. Using the real time watering data, the tree will send back an instant response which might confirm its feeling healthy, or even ask for some water.

The hope is that the app will get more people engaged with Melbourne’s urban forest and tree health, taking some pressure off local councils.