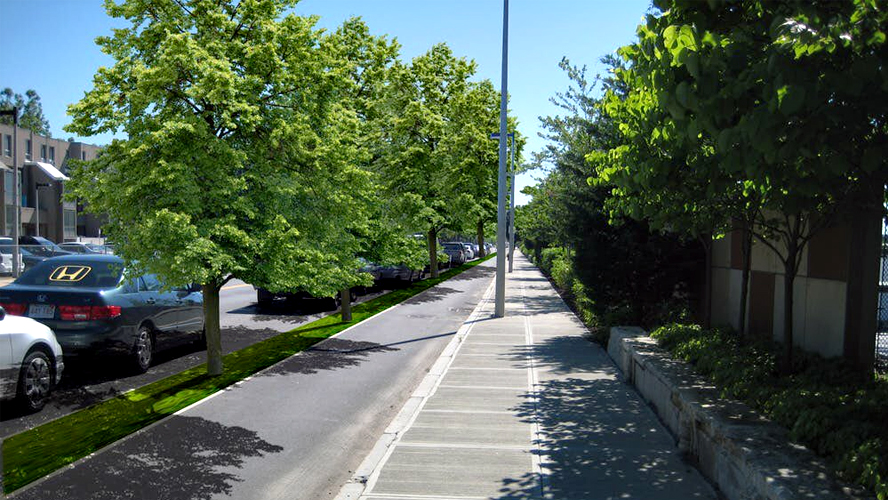 For decades, city streets in the U.S. have been engineered to keep road users and pedestrians safe. If city streets do include trees, they are usually planted in small sidewalk pits, where they have limited access to water. This means they live, on average, for just three to ten years. Until recently, the lack of trees in U.S. streets has been matched by a lack of cycling paths – exclusive, protected tracks for cyclists between the road and the sidewalk.

However, with cycling becoming increasingly popular, both for commuting and recreation, there is a push for city planners to integrate more tracks and trees into busy U.S. streets. A new study published in the Cities journal and highlighted in a podcast from the Harvard T. H. Chan School of Public Health explored whether pedestrians and cyclists in the Boston area enjoyed having trees in city streets. It also asked where they preferred trees to be placed, and whether they believed trees offered benefits.

In the study, 836 pedestrians and cyclists on five existing cycling tracks were shown photomontages. The images included proposed configurations, such as a row of trees separating the cycling track from the street, or trees in planters extending into the street between parked cars. Participants were asked how effectively they thought the trees:

The findings showed that both pedestrians and cyclists liked having trees, preferably between the cycling track and the street. They strongly preferred the images that included trees, reporting that the trees blocked their view of traffic, lessened their feeling of being exposed to pollution, and made them feel cooler.

With many city leaders promoting cycling to reduce traffic and combat climate change, attention is turning to street design. Specifically, how and where to plant trees in relation to cycle tracks and sidewalks, and how to help trees flourish through urban design. There is a call for planning experts to design “climate street guidelines”, which would focus on delivering physiological and psychological benefits to all street users.