Koalas can live the city life with suitable green spaces 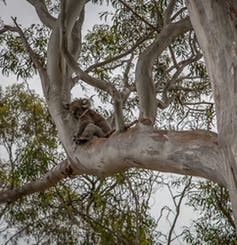 Australia is one of the world’s most urbanised countries, with 90% of the population living in cities and towns. With Australia’s population predicted to increase to over 49 million by 2066, urban development is on the rise. As infrastructure increases, so does the threat to our native wildlife – particularly our precious koala population.

The good news, according to a recent study, is that koalas can learn to live the city life – as long as they are provided with enough suitable green space.

In newly published research by Frontiers journal – a leading open access publisher and science platform – stress levels in wild koalas were measured according to their habitat. The study found that koalas are most stressed in rural and rural-urban fringe zones, where threats like heatwaves, bushfires, dog-attacked and vehicle collisions are highest. Comparatively, koalas living in urban areas are less stressed, provided they have access to suitable green habitats.

In other words, with the space, time and freedom to adapt, koalas can co-exist with human populations.

We can help make urban environments more suitable for koalas and other wildlife species by ensuring their basic needs for food, water and shelter are met – and by considering their needs as part of planning approvals and the creation of urban spaces.

Currently, in Australia, urban design is not green enough. Even in suburbs with plenty of trees and green space, problems still arise because urban planning typically designs for human recreation. It doesn’t consider the wildlife that was living there before the housing development went up. This needs to change.

Providing wildlife crossings in urban areas is part of the solution, together with driver education programs. Most importantly, urban developments need to incorporate more healthy green trees with vast coverage and canopy – and in the right species to accommodate local wildlife.

Measures like this can minimise impacts on koalas and make the adjustment to city life much smoother.