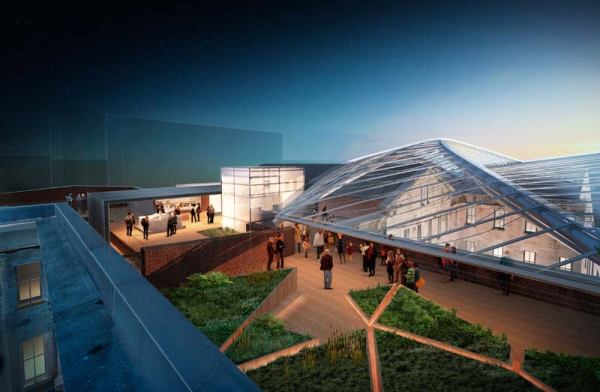 Innovation inspiration comes from everywhere. But with Biomimicry, developers and innovators derive their inspiration from nature.

Biologist and science writer, Janine Benyus, started Biomimicry and the concept has since spread globally, with several companies embracing its practices.

“It’s about looking to nature for inspiration for new inventions. It’s learning to live gracefully on this planet consciously emulating life’s genius. It’s not really technology or biology; it’s the technology of biology. It’s making a fibre like a spider, or lassoing the sun’s energy like a leaf,” Benyus said on her website.

San Francisco’s Museum at the Mint is one of the latest buildings getting inspiration from nature. The building includes a glass canopy that captures rainwater and moisture for the building’s plants.

According to an article by Paul Woolford from HOK San Francisco, they approached the renovation design as a model for sustainable innovation.

“Our design creates a glass canopy structure floating above the Old Mint’s existing open-air courtyard. The canopy ties the building together structurally, brings in daylight and preserves the historic courtyard facade that is currently crumbling,” Woolford said in his article.

“This canopy captures rainwater and moisture from the fog with the use of a fritted system – a ceramic dot screen raised above the surface of the glass canopy. The frits modulate the daylight and glare and the surface provides 100 percent more area for moisture to collect. When it drains off the glass, the water is captured by cisterns sitting on the roof. The roof becomes a living museum exhibit that relates to the site’s wetland past.”

In an article on Forbes website by Rebecca Bagley, she said that Biomimicry is going to be one of the five tech trends that can drive company success.

“Companies are increasingly looking at ways to incorporate biologically inspired designed into their products, and organisations like Biomimicry 3.8 are helping them redesign carpets, furniture, airplanes and even entire manufacturing processes,” Bagley said.

This is echoed by a research commissioned by San Diego Zoo Global in November 2010. The report said Biomimicry could be a “major economic game changer”.

The report “The Global Biomimicry Efforts: An Economic Game Changer” said that the applications of biomimicry to commercial use “could transform large slices of various industries in coming years and ultimately impact all segments of the economy”.

“Industries that could be particularly affected include utilities, transportation equipment, chemical manufacturing, warehousing/storage, and waste management, architecture and engineering.”

Biomimicry has also been used by several cities around the globe to tackle runoff. In an article by Dave Levitan on Yale environment 360, he said that cities in the United States like Philadelphia, New York, Washington, Portland, and Seattle have “embarked on innovative stormwater runoff fixes that rely not so much on the old gray infrastructure of huge, piped systems and sewage treatment plants, but rather on new green infrastructure techniques to collect and treat stormwater at the street level”.

“Green infrastructure mimics how nature handles rainwater through the use of porous surfaces, rather than impervious surfaces like roadways. These techniques are decentralised. Instead of one facility or large underground tank to store water when a big storm hits, the idea is to eliminate the need for such storage through the use of green rooftops, roadside plantings, carefully landscaped parks, rain gardens, rain barrels, and other swatches of nature dropped down inside the landscape of modern cities.”

Levitan said projects like these show how nature is very useful in solving human issues through “classic straight-line engineering”.