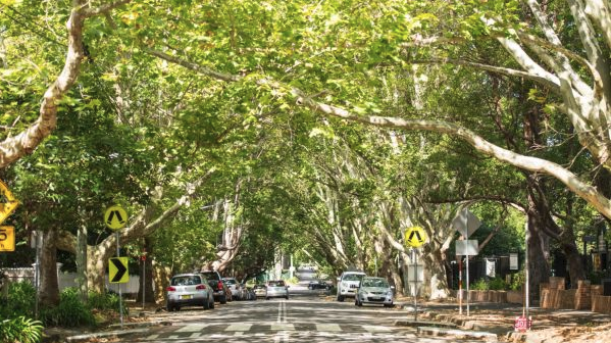 Australian summers can be devastatingly hot. As the mercury continues to rise this season, an urban greening movement is campaigning for more trees to cool the country.

Dr. Tony Matthews, Griffith University urban and environmental planner and 202020 Vision advocate knows that street trees play a vital role in reducing heat. Without trees, heat is absorbed by hard surfaces like concrete and radiated back into the air. This is commonly known as the “urban heat island effect”. That’s why he’s working with 202020 Vision – a group that includes some of Australia’s leading green space experts – to make urban spaces at least 20% greener by 2020.

However, it’s not just the cooling benefits that make street trees so vital. As Dr. Matthews explained, trees benefit resident’s health and can even boost their bank balances by reducing power bills.

“People in areas with less greenery and more housing density; their bills are going to go up,” Dr Matthews said. “So, the people who can least afford higher electricity bills ending up paying for them.”

Plus, communities with more shade from trees were more walkable, Dr Matthews said. Green spaces encouraged people to get outdoors and, in turn, contributed to social cohesion.

As for how to reach the goal of increasing Australia’s greenery by 20% by 2020, Dr Matthews said local councils had a major role to play in ensuring that trees were integral to new developments.

“Councils, through their planning [schemes], need to start insisting on tree cover and tree provision,” he said. “Once a housing estate is finished it’s up to the council to maintain and pay for trees and green space … councils are reluctant to do that [at the moment] because of the cost.”

While the cost of tree planting and maintenance may be high, the huge savings in health and wellbeing far outweigh the price, according to occupational heat stress consultant, Matt Brearley.

“There’s a lot of people exposed to the urban environment. It’s extremely important to mitigate that outdoor heat for those outdoor workers,” said Mr Brearley. “We need cooler environments in our urban settings, so workers don’t suffer heat stress.”

“A cooler environment allows a bigger window for the public to do what they want to do, whether it’s working or walking”, he added.

Lyndal Plant, an urban forester, said Australians were also prepared to pay more (3.73% to be precise) for houses on leafy streets, and even more in cities where tree cover is scarce.

“In my study, for every dollar invested in the planting and maintenance of street trees there would be a return of at least two dollars”, she said.